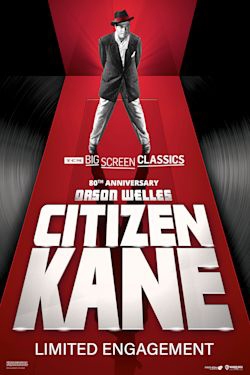 Fathom Events, Turner Classic Movies and Warner Bros. are bringing Citizen Kane to select cinemas nationwide for a special limited engagement, which includes exclusive insights from TCM. Alone at his fantastic estate known as Xanadu, 70-year-old Charles Foster Kane dies, uttering only the single word Rosebud. So ends the odyssey of a life ... and begins a fabulous tale of the rise to wealth and power--and ultimate fall--of a complex man: A boy abandoned by his parents inherits a fortune, builds a global newspaper empire and aspires to become President of the United States, but he loses everything over an affair with an untalented nightclub singer.